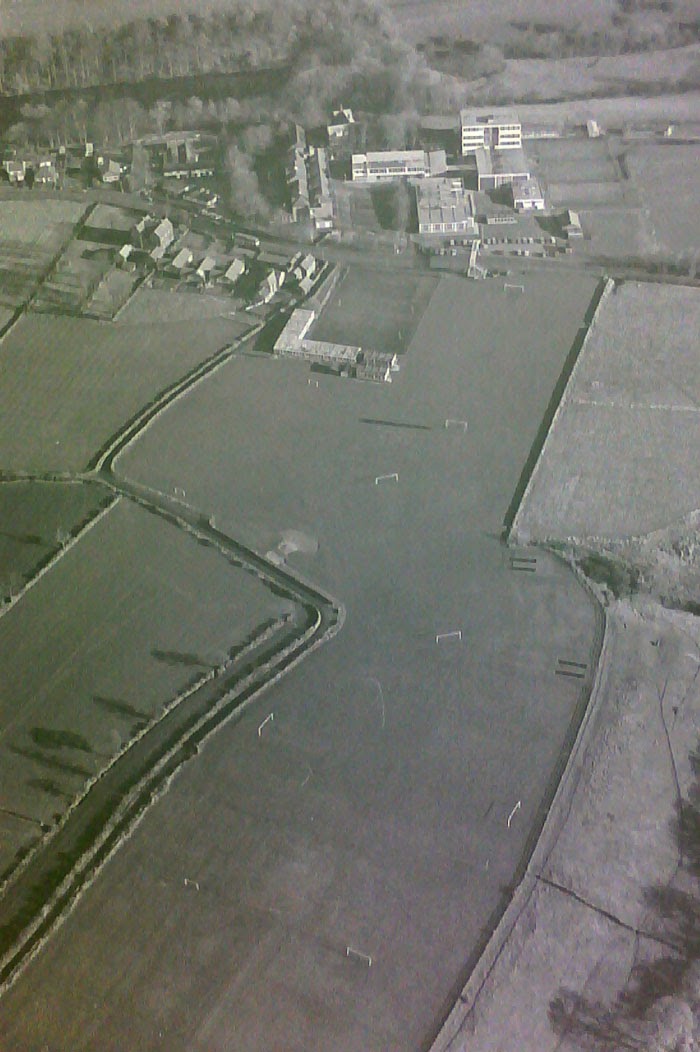 This is an aerial shot I took sometime around 1982 from a Cessna light aircraft at about 10:30 in the morning. I remember thinking at the time, that the playing field looked as if someone had been over it with a staple gun.

In 1992, I attended the 600 Years of PGS reunion event. This was a major event in the school’s history and I seem to recall it was spread over several days to allow visitations by many former pupils covering several years and forms. Unfortunately, the time I could spend there was limited and I had to leave long before I wanted to! Given my former experiences of the school, I couldn’t believe how much I actually enjoyed attending the event. Meeting old friends – and a few old adversaries – there just wasn’t time to get around everyone… even if I’d stayed all night.

Some 30 years later, after another reunion of my old form (Friday 14 November 2008), I arranged with a friend who still worked at the school, to give me a tour of some of the buildings and grounds – prior to proposed redevelopment work taking place. It was during the Summer Holiday that I visited and, without any kids about, it was eerily quiet.

After my tour, I wrote a few words that included the following:

I asked if we could look inside Fulford first.  It was a building that somehow was more significant to me than any of the others.  The first two years of most of our lessons had been spent in there and a couple of years ago I had spent some time walking the corridors on both floors in one of my dreams!

The biggest shock for me was the extreme run down state of the school buildings, both internally and externally.  Although the usage and furniture of many rooms had changed, the flooring and décor had not altered since I had left in 1979.

I didn’t really complete the writing, but you can see the rest of it here. (pdf file)

Little is now left of the original school, but the first, and possibly oldest building, Weirfield, is going to remain for flats. Although my personal memories of being at the school were not the happiest, I was sorry to see that one of the most important of the original buildings, Fulford, had been demolished instead of refurbished as flats – the original intention. Possibly every pupil who had ever been to the school (in my lifetime) would have spent at least the first 2 years frequenting that building – the heart of ‘lower school’.

A friend of my brother’s, Stuart Gibbins, contacted me to ask if I had any photographs he might be able to use for the PGS Archive Project. Stuart has done a fantastic job of photographing the whole of the old school and building a 360 degree site which shows both the history and the process of development – demolition – and redevelopment which you can view here. After looking at the work Stuart had already accomplished, I really didn’t have any photographs better than those he already had – but I sent what I did have.