Yesterday, I bought some more leather for wand making: 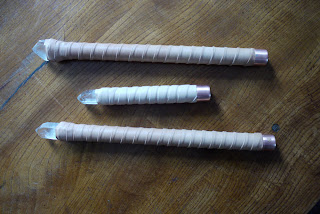 The above wands are for sale here

I started making wands in the early 1980s and wrote a booklet about how to make and use them: 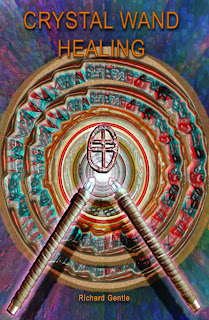 I began experimenting with healing in 1981 after combining breathing and ‘Chi’ energy techniques from my practice of Kung-Fu with information I had started to gather on healing and crystals.  Throughout the 80’s, I attended talks and workshops relating to healing, including a weekend workshop with healer, Matthew Manning when he visited Newcastle.  (Matthew was in some ways the English Uri Geller – but devoting his abilities to healing).  The information Matthew shared on healing was very much inline with my own philosophy at the time and it was good to know that I was having parallel thoughts on how healing could be most effective.

In 2006, I published the book shown above.  By that time, I had already fine-tuned my own technique and received positive feedback from a number of friends and clients – many of whom commissioned their own wands.

Each wand takes me between 1 and 2 hours to make, depending on the time taken for preparation of materials and setting up of work space.  The wands are then programmed for general healing use, activated and tested.  (Individuals who buy or make their own wands are encouraged to program (or reprogram) them as described in the book).

The healing wands have some interesting properties.  In addition to speeding up the natural healing process, they are particularly good at:

The wands may appear to be rather plain-looking, but it is important in their design that they are kept simple.  Users are free to embellish their wands on the outside (if they really want to), but should leave an area untouched where they intend to hold or grip the wand.  The regular wand shaft is 12 inches in length with a diameter of approximately 1 inch.  Variations on this are available, but for most purposes, these are the preferred optimum dimensions.

You can read more at Richard Gentle and Hand of Light.