A busy half term week started with collecting my daughter from the West Midlands and ended with putting up an exhibition of my Dad’s artwork in Cambridge.

We arrived at St Michael’s Church, Trinity St, Cambridge, on Thursday 31 October at 4.15 pm. To reach the Chancel, we passed through the very nice Michaelhouse Café. 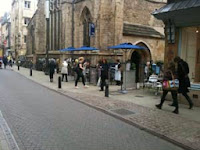 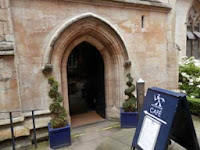 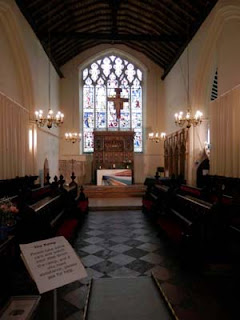 The Chancel side walls are lined with curtains hanging from pelmets and this is where the exhibition had to be hung from.  The pelmets are about 9 feet from the floor of the seating and access with a ladder is complicated by the proximity of the pews: 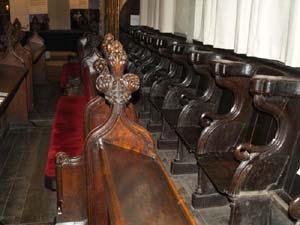 However, we managed to position the ladder at an angle – even though it felt almost vertical when standing near the top! By about 7 pm all but one of the paintings was hanging. This was due to the curtains on the left wall being longer then those on the right wall, since the last arch on the right was only half an arch to accommodate a through-way to another area of the building. This meant we had to move some of the paintings along and place another in an area with no pelmet:

(You can see the painting on the right in the area it has to be hung).

The next afternoon, we arrived at 4.30 pm to put up the last painting and adjust the spacing between everything. An extra spar of wood had to be used to bridge the gap, since there was no other way to secure the wire fixings: 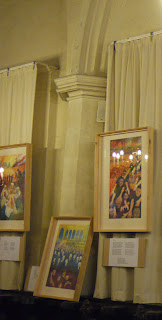 This is the main synopsis for the exhibition:

“Everyone believes in something, however practical or abstract. At the centre must be “The Architecture of Belief” we have in SELF. Imparted in family; embedded in community; developed by groups and associations; sharpened and made more inwardly and deeply personal by individual thought, experience, reading and reflection. This belief can lead to striving beyond limitations; extending physically and imaginatively our lives and way of life or the opposite, withdrawing and defending what we believe and how we live.
Across this broad spectrum we can witness and have placed before us instances and images of human activity across our planet. This kind of broad view, however partial, can help us recognise that there, somewhere, but for the chance of being where we are, we could have been conscripted, regimented, deprived, abandoned, to any of the other conditions of life we are shown that are not ours. Any overview, however simplistic and ‘detached’, should induce feelings of compassion, wonder, sadness but also hope; even as we are not placed in dire positions to defend our belief but want peace of some sort for those who have to defend theirs.
Each of the twelve images evoke aspects of humans conducting their affairs and the hope that belief in the diversity and range of human life can release its spirit rather than kill it.” – Keith Gentle 2013
The exhibition will be visible to the public from now until the end of November 2013:
St Michael’s Church, Trinity St, Cambridge CB2 1SU
Phone: +44 1223 309147
Hours: Closed on Sunday
The Michaelhouse Café